THE MYSTERY OF THE VANISHING "ON" BUTTON 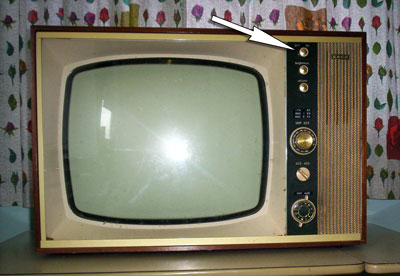 When I was a little kid TVs were made of glass, had tubes inside that warmed up and had a very large ON/OFF switch right on the front. Now TVs have plastic screens, no tubes and the ON/OFF switch is hidden. Yes hidden!

I first noticed this when I bought a Playstation 4 video game console.  I wondered why the designers had made the power button so small, hidden and weird looking. You actually had to read the manual to find out how to turn it on. I thought the designers were trying too hard to make the device look “cool.”  But now I know the truth.  Sony never wants me to turn my Playstation off!

There is actually a good reason for this. I can turn on my PS4 using the remote control so the system always has to have electricity in it to listen for the remote.  Technically it cannot be turned off the way an old time tube TV could.  At best Sony wants it in sleep mode when not in use so Sony can monitor it.

Sony is not alone.  TV manufacturers are hiding the power button. Apple hides its on the back of its all in ones.  The power button on the new Apple Macbook Pros doesn’t even have anything on it to tell you what it is! They will turn themselves on if you open the lid or even touch a key, so how are you supposed to clean the keyboard?  Wait for the non-removable battery to die?

Tech companies want their products on ALL THE TIME because turning them off is the equivalent of killing them.  How will they spy on you, monitor you with cameras and micrphones, throw ads at you, or monitor your behavior when their little minions are unplugged?

I have seen so many people blaming themselves (or their spouses) when things go wrong with computers that are either not their fault or the deliberate results of choices like making power buttons impossible to find. In reality the problem is in your TV set, they simply don’t want you turning off their products.

This leaves lots of gadgets in your home sipping power all day long. First the two pronged “vampire” power converters like the ones shown at left are constantly converting electricity from AC to DC.  If you feel one and it is warm that is wasted energy if the device is not even being used.

This massive energy waste increases the carbon we burn to make electricity. This increases climate change.  It also costs consumers money with higher utility bills and electronics that burn out early and have to be replaced.

Approximately $19 billion worth of electricity, equal to the output of 50 large power plants, is devoured annually by U.S. household electronics, appliances, and other equipment when consumers are not actively using them, according to a groundbreaking study released in 2015 by the Natural Resources Defense Council.

What can you do about it? Not much. Use timers, use smart power strips and tweak device settings to minimize “always ON idle time.”  But until manufacturers take this issue seriously (and they don’t care about your electric bill one bit) it won’t go away. 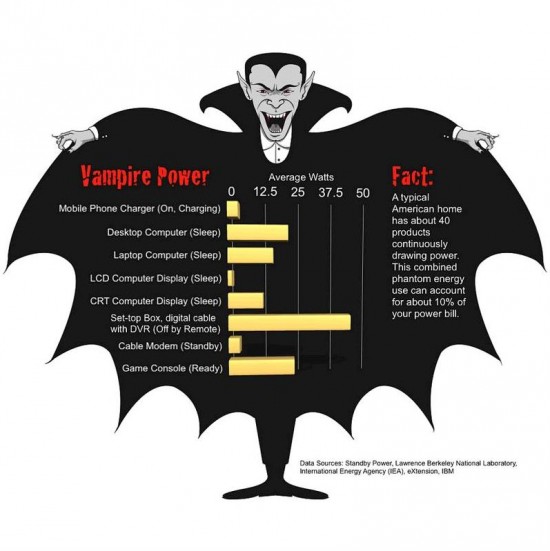